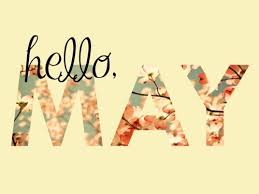 
Yay!!! May is here!  May the fruit of our labor be nourishing and sweet.

And yes, I will do better this month.

Happy New month friends. April is here!!! Did anyone get fooled on the 1st? Or did you fool anyone?  I didn't even fool anyone on that day but I got fooled by a few people and as it wasn't in excess or anything bad like accident or death, it was alright. I think the April fool pranks where you say living people died or they were involved in a fatal car accident are really scary for me, I don't know if I can take that kind of prank.

Social media has made the whole world more accessible and everyone is in everyone's business. Getting information and connecting with people is almost like blinking. The whole thing gives me a  high sometimes knowing that I have that power on the palm of hands; Facebook, Twitter, Google, LinkedIn,  etc. Reaching out to people, sharing your own views on issues, sharing your experiences, everything is just so easy now.

But there is good and bad to all this exposure. We seem not to know when to just shut down and talk to people face to face.  You see people out for lunch/dinner, church, theater and they are glued to their smartphones or taking furtive glances at it. It is just like we can't stop. We want to read what people are saying, see what they are wearing or doing, who they are getting engaged to or marrying, how they are bringing up their kids and we just don't know how to connect with someone face to face or maybe we don't see the need anymore. I am also guilty of this sometimes. I catch myself sending texts or links to my husband even when he is back home. I don't follow social media that much but when I do, I get caught  in the discussions, back and forth arguments or fights, potty throwing etc and it just makes me wonder sometimes. We are saying so much with our fingers but have forgotten how to say the same things with our lips.

The other day, I was listening to a  program on radio and the question was, can you give up social media if your partner said so? Most of the callers said never. They could never give up twitter, Facebook and the rest of them for anyone cos social media was an outlet for all the craziness and creativity in them. It sounded like mankind didn't experience quality living before social media. How were we handling all our creativity and craziness before? Whatever happened to hobbies?Now our hobbies are tweeting....

Where do we draw the line on flirting, cheating with social media? Some say they are just  fooling around words and should not mean anything, I think they mean something though. That is the root of emotional cheating. Are words not supposed to be like bonds? A written word more so? Hmmmm.