All the good Nigerians stand up.

I was at the library sometime last week and an elderly Caucasian man was asking an elderly Asian woman if she was Korean,the woman went into a fit saying she is American and she has always been American. She also said some things in another language that wasn't English. The man quickly said he was asking because he heard that students in North Korea were behaving like students in the US * or something sounding like that*. The woman didn't want to hear any of it. She just insisted in her broken English that she is American before shuffling away. She didn't want whatever was happening in North Korea to be rubbed on her. I bet she was thinking " what is this man's own sef, trying to rain on my parade". I tried to stifle the laughter that was bubbling inside of me. It was really funny. I didn't laugh for long though because it got me thinking and I remembered times when I had kept quiet or left gatherings when some issues were discussed. Of course I feel ashamed  but I just didn't want to be a part of all that drama at that time.


I remember watching the news once at a Kenyan friend's house and they had a special report on people who scam and cat-fishing and the main guy that was interviewed was talking about his girlfriend in Nigeria and how he sends her money; even though he knows that the probability he is being scammed is high, he can't help it. This led to discussions on how bad Nigerians were and how they cant be trusted bla bla bla. Sitting down there, hearing the back and forth, it didn't feel good to be identified as a Nigerian. Then when the Woolwich attack happened last week, it was my Ghanian neighbor who told me that 2 Nigerian boys butchered someone in broad daylight. My heart sank, not again. There are so many good people and things about Nigeria, why is it that it is only the bad things that makes headlines? There are many Nigerians home and overseas making a difference, adding value to their communities, why don't we hear about them? Those are not news worthy items?

There are only two types of people in this world irrespective of where you come from, people who make good choices and those who make bad choices.
Posted by Okeoghene at 10:06 PM 22 comments:

Hope everyone had a good weekend. It was Mothers Day over here  this past Sunday so though I believe Mother's Day is everyday  and a mothers job is never done, I still wish every mom, grand-mom, god-mum, aunty, sister, nannies a belated mother's day.

So this morning as I was trying to catch a bit of news and gossip on TV, I saw the picture of Angelina Jolie flit through my screen and I was wondering whether she had a movie coming out or she was finally tying the knot with Brad Pitt. I didn't wonder for long though as I found out she had a double mastectomy as a preventive measure against cancer.

According to the op-ed published in NY Times, she said her mother struggled with cancer for about 10 years and died at 56. She found it difficult explaining to her kids about the sickness that took their grandmother. After genetic tests, she found out she also had the defective gene with an 87 percent chance of having breast cancer and a 50 percent chance of having ovarian cancer. She said it wasn't an easy decision to make but she was happy she made it. She took a proactive step. She not only wants to stay healthy and active for her family but she also wants to confidently reassure them that she is doing everything possible to avoid the disease that took their grandma.

Before today, I wasn't a Jolie fan because of the Brad Pitt- Jennifer Aniston issue. I saw her as the "other woman" that came to destroy a "perfect" couple. I laid all the blame on her, though at the back of my mind, I knew that no 'other woman' can take your man if your man doesn't want to be taken.  Anyway, hearing this news today changed my mind about her. She is not just your average celebrity, she is also a thoughtful woman who is committed to  making the world a better place. She wrote her article in the hope that other women will benefit from her experience.

These days every news is food for reality tv, you can just imagine if this was to be happening to one of the Kardashians, they would have turned it to a media circus. She broke the news on her own weeks after the last medical procedure, in an article in NY times. Even after the procedure, I bet everyone will still think  the Lara Croft protagonist is still sexy.Though it is expensive to do the genetic tests and Jolie's situation is rare but she encouraged women with family history of breast and ovarian cancer to seek medical advice for their particular situation as every cancer is different.

Most important for me is that she has gotten people taking about breast cancer again. There is a lot of fear and ignorance about cancer but the only way we can reduce the number of people dying from this disease annually is by awareness....by talking about it.... and then doing something about it.For that, Bravo Ms. Jolie. 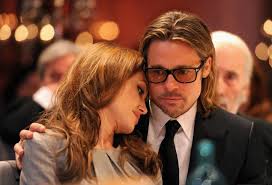 PS:There is nothing like a good support system during a time like this. ... And yes, they look good together.
Posted by Okeoghene at 9:20 PM 16 comments:

Hope everyone is doing good and enjoying the May flowers? I know I am, they just make every where look more beautiful and they definitely cheer me up. Hmm-mmm-mmm

So yesterday I had children in my car, *like, I ever drive around without one or more kids in the car* But I am talking about kids other than mine; kids who are not aware of the rules I have in the car about seat belts; kids who have never seen or experienced the panic that attacks me, if they take off their seat belts for whatever reason while I am still driving. Yes, those kids.

So one of them took off her seat belt to get a toy that she had dropped on the floor. Immediately I realized that she was off her car seat trying to get said toy, I panicked. I was transported back 2 years ago.....

It was a Sunday evening, I was home alone with the children. My house-help went for a class and I wanted to go to my mom's. I had no car seats for my kids because they were always carried whenever we went out *error*. The sensible thing was to wait for my help to get back so we would all go together to my mom's and she would carry my 9 month old as we usually did. I was impatient. I was thinking to myself, the drive is less than 5 minutes, my mom lived a street away, what harm could happen? I forgot about  the terror of  okadas. I was almost at my mom's house when one okada came out of nowhere and to prevent hitting him, I stepped on my brakes forgetting that I had a baby not properly strapped at the back. Before I could say jack, my baby was on the floor crying, his older sister was trying to pull him up only to come up with blood on her hands. I dont know how I made it the rest of the way but it wasnt funny. Spent hours at the hospital that evening. Thank God, the cut on his head wasnt deep so he didnt need stitches. The enjoyable evening  I envisioned became one of worry, tears and 'had-i-knowns'. So from that day, I was preaching the gospel of children must be properly strapped  in their car seats.

....Sister Calm deserted me at that moment. As I was telling her to get back on her seat and fix her seat belt, on the same breath I was asking my son why he didnt stop her from taking her seat belt off* wonder what a 3+ could have done* I was also looking for an available spot to park and make sure she gets strapped properly before we continue on our journey. I was so scared that the worst could happen. I was super glad when I dropped them off at home. Only for me to see a small child seated on the center console of a car, playing with another child in the car who was seated properly while the mom was looking for a parking spot at the mall. I just shuddered. I was scared all over again for the mother.Ehn!

Children must be restrained in a moving vehicle at all times no matter how short the distance.
Children must ride at the back of car either in an appropriate car seat or booster seat.  Children below 13 must sit at the back.
Everyone must be buckled up on every ride.
And that is my gospel of safe driving with children.

What are your own tips for driving with kids?
Posted by Okeoghene at 11:39 PM 15 comments: