What if I do nothing?

I was listening to a program the other day and one of the subs was on failure or more like the fear of failure and this guy was saying he was so scared of failing that he will never take on anything that he is not 105% sure he will not succeed in. He will not talk to a girl if he is not sure that she will say yes, he has a passion for photography but according to him, he is sure he will fail so he is not even going to try it out at all. As  I listened to him talk about all the things he wanted to do but can't do because of his fear, I was like this guy is not serious. What kind of life is he living? There is no guarantees to this life we live, so failure will definitely happen sometimes; Stop setting yourself up for failure buddy, get over yourself and do what you need to do * that sounded insensitive*

On second thought, I just cast my stone on the poor fellow, because somehow I am just like him. * Is it true that we are more critical of others on the same issues we regard as flaws in us?* I am also scared of failing.Sometimes I am afraid of not fulfilling my purpose, I am scared of this parenting thing and maybe all my yelling has scarred my kids for life, I am afraid of blogging and putting myself out there even though I want to do more of it. So in some situations, I do nothing. Since I am not faced with vulnerability of failure, I feel safe.

When you do nothing, the situation gets worse.
When you do nothing to a troubled relationship, it fizzles and ends
When you do nothing about an unhealthy lifestyle, you are looking at sickness, overweight, and health issues in the face
When you do nothing about following your dreams, they don't just remain dreams but they enter into the regret and i-could-have folder and might cause you to resent yourself sometimes.
When I lock myself up in my world of 'I am scared of doing stuff', I deprive myself of all the opportunities and learning experiences that might present themselves if I only tried.

So doing nothing, though very easy to do, not only plays out our worse case scenario is more expensive that doing something.

There is actually nothing that is not recoverable after trying and failing. When we try and fail, instead of giving up, calling ourselves failures, we should ask ourselves, how bad is it? is it recoverable and how can I learn from that experience?

There are so many people who failed initially but eventually became successful.
Thomas Edison failed 1000 times before he succeeded at the light bulb.
Abraham Lincoln failed so many time before he became one of the greatest leaders.
Michael Jordan didn't make it into his high school basketball team, today we call him one of the best basketball players of all time.
Bill Gates, Walt Disney, Oprah, they all had failures that eventually became success stories.
There is always a learning point in every experience.Why do I continue to limit myself from learning?

Achieving any goal involves risk and vulnerability. The push we need to walk on  that path should be the thought,'what if it works out?' That right there should be our positive incentive.

This is a reminder even for me as I type this, doing nothing will always cost me more than taking a shot at it and learning from trying. 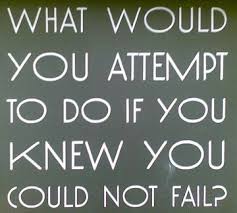